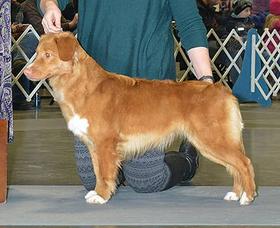 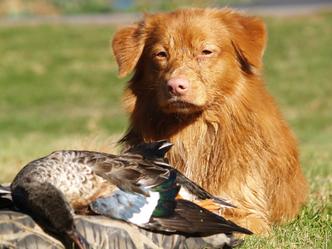 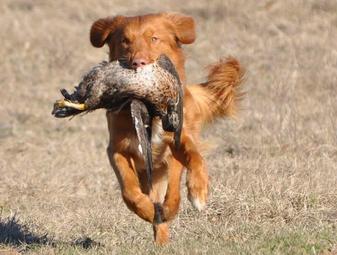 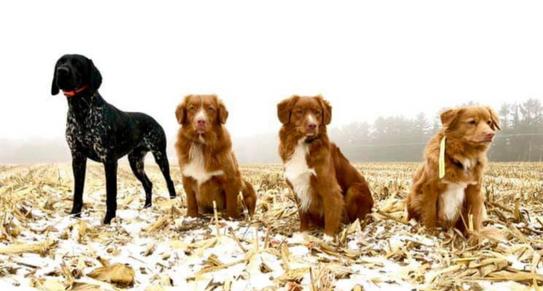 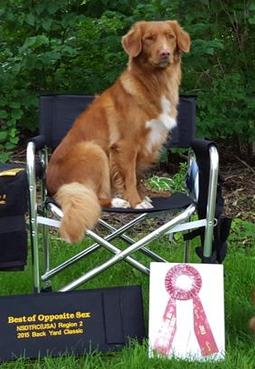 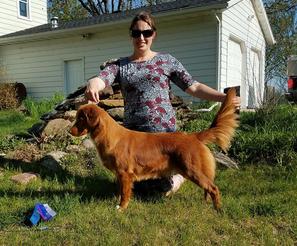 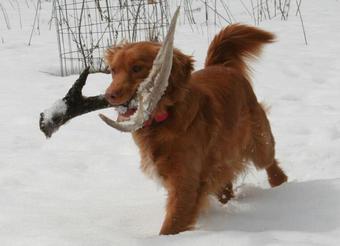 Grizzly is the first toller we competed with and has taken us on quite a ride.  He is a confident, self assured dog who is willing to work all the time.  Grizzly is also somewhat of a playtime instigator, never acting his age and enjoying playtime!  He is our number 1 hunting companion and top dog here.

Gus is our fun loving boy from our 2013 Jade x Burnie litter.  Appearance wise, he is the male version of his mother, and equally slow to mature!  He has his sire's never ending zest for working and play!  No one can resist when he decides it is time for a game of chase.  Gus had some nice placements such as a 3rd place win from a large open dog class at both 2015 BYC and 2015 Nationals. He finished his championship with 4 majors and multiple Best of Breed wins over specials.  Gus is co owned by our family and lives in Northern Wisconsin.

Vixen is our girl with two loves in life: Pheasants and agility!  You would think she was lazy as she loves to snuggle up on the couch or curl up on a dog bed in the sun.  But watch out when it is time to work!  She has a nose that can put others to shame and she will find anything and everything (good and bad)!  If Vixen has a better handler in agility, she would be well on her way, but we are slowly getting there! Vixen is retired from our breeding program, but actively competing in agility and barn hunt. Vixen is also certified to work with Ben and loves checking boats for over-bagging fish during fish run!

Jade is our lovely foundation girl from Canada.  She has a love for all things retrieving and babies!  Jade is a fantastic momma to her puppies and also mothers our human baby!  She is a hard worker but sometimes likes to play games.  Jade has produced nice litters for us and is now retired from the whelping box.  Jade never loved the show ring when earning her championship but we decided to play again in 2015 and she showed like a rock star as a special, easily earning her Grand Championship with all major wins over specials.  Jade is a big snuggler and has been known to "roo" with excitement when she sees her favorite people!  Her gentle, loving, retrieving crazy traits have definitely been passed on to her pups and grand pups!  She is actively training in field, obedience, and dock diving.

Cougar is our birdy girl joining us from Susqudilla Kennels in New York.  Cougar is maturing nicely and completed her championship with several big wins. During her quest for her GCH she won  Best of Breed at a regional supported entry. She is driven in her bird work and doing well with her training. Cougar is actively working on her obedience training as well as continuing her field work. She thoroughly enjoys tackling Leinie during field walks and plays rough with her buddies.  Cougar will be an up and comer in the whelping box and field tests in 2020.


​Rogue is from our 2013 Jade x Burnie litter.  She is co-owned with our friends at Roaneden Tollers in Canada.  As a puppy, Row was always the last one to get put back in the puppy pen because she wanted to keep playing.  Nothing has changed, she refuses to sleep until crated and is sometimes caught falling asleep on her feet rather than give in and nap!  She has tons of drive and is naturally birdy.  Row loves to be a little rockstar in the show ring as well.  She will show for anyone and has helped teach many people, myself included, how to handle in the ring! Rogue is half way to her Bronze Grand Championship in AKC and will continue to work on it in 2020.  Row lives part time in WI and part time in Canada.  ​Check out more about Rogue on Roanden's page www.roaneden.com ​